Edward Mason was a changed man because of his four year old daughter. The day his daughter went missing because of his past, was the day his life turned upside down. Isabella Swan was just another student at the University of Chicago until her father's actions came back to haunt her. When their worlds collide, will they be able to overcome their differences and survive? All human

A horrible accident leaves her in a coma, when she wakes with no memory of her previous life, she has a hard decision to make; the past or the present. A man ready to help her remember, or a man ready to help her start over. Living in the dark for so long, only to find out you may have made the wrong decision leaves her world crashing down around her. All human. Warnings in each chapter. 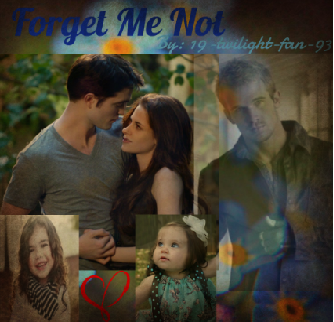 When Charlie moves to La Push with Sue, Bella is welcome into the Cullen house wih open arms. What happens when there is a box found while cleaning out Bella's room? Cannon Pairings. Cullens - Vampires Bella - Human

After a drunken night, Isabella fell pregnant by an unknown man. With her brother's help, she raises her child, but what happen when two little boys with green-eyes show up at her day-care? Will all her questions finally be answered? All-human

Jasper Hale was deployed to Iraq two weeks before Christmas. His wife, Alice, and daughter, Paige, are hoping for a Christmas miracle when they find out Jasper won't be spending Christmas at home. Alice and Paige will do anything to make their wish of spending Christmas together as a family come true.

Bella and her friends decide to find the truth behind several ghost stories told the night before Halloween. Little did they know that this Halloween was a one neither of them would ever forget.

He watched as the girl pulled and pulled on the cuff which kept her attached to the wall, but no matter how hard she tried, he wouldn’t come off.

“You are going to hurt yourself.” He said as he watched her through the small opening. She gasped in fright and turned around to face a set of glowing red eyes.

“Who are you?” She whispered.

“I’m the least of your worries right now.” He said, then closed the small opening in her door and left the basement. She screamed after him, demanding to be set free, but her screams were a waste of breathe as the door to the basement locked once more.